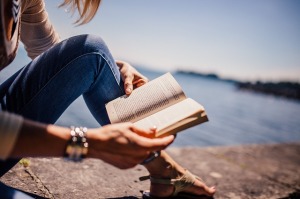 In my previous post I wrote about where I like to write, which is basically anywhere and everywhere.

This prompted me to think about where I like to read, which is pretty much the same – anywhere and everywhere!

The beauty of having reading as a hobby is that a book is portable (either in hard or electronic form).

I can read at the airport, on a plane, by the sea, in the car (not while driving!), in a waiting room, but my favourite place is in bed – in the morning before getting lost in the craziness of the day, or at night, winding down after the craziness of the day! If only I could stay awake to read more than one paragraph, one page or one chapter!

There is nothing better than cuddling down under the covers and losing yourself in someone else’s world – their delights, loves and challenges. It’s pure escapism!

And to make it extra special is when it’s raining. The soothing beat of the rain on the roof cocoons me further into a character’s world.

reading on a plane

One of the most bizarre reading incidents I had was on a plane flying from Christchurch, New Zealand to Sydney, Australia. The book I was reading was Shadows of Power by Jennifer Bacia. It was rather surreal as I read about the character who also happened to be on a plane flying into Sydney! Jennifer was detailing exactly what was happening as the plane was coming into land at the same time as we were coming into land! I was very close to finishing the book, but had to put it down as we disembarked. Determined to finish it, I picked up the book and read it to completion while I was waiting to clear customs and immigration.

I also read outside in summer with the wind blowing across my face and in winter a nice, warm place inside in the sun with my cat, Zorro, curled up on my lap. Bliss!

where not to read! 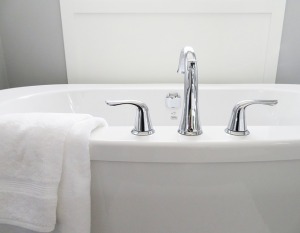 When I was still at school, I used to read in the bath until I dropped a book in the water and had to explain to the librarian, with lowered eyes, why the pages were crinkly dried and red dye from the cover was dispersed throughout the book. Needles to say my bath reading days were over.

If you love to read, reading becomes more special when you have your own favourite place to read.

Where’s your favourite place to read?