Did you guess from my photos in my previous post that I had the most glorious time on my holiday in… San Diego. 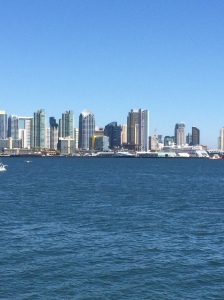 What an amazing city! While I had been there briefly over 16 years ago (I visited Sea World and passed through it on the way to Tijuana) it had never crossed my mind as a place to have a holiday. This would mainly be because it’s not promoted as a tourist destination in New Zealand. Kind of, out of sight, out of mind.

When the opportunity arose to have a holiday there I jumped at the chance even though I still didn’t know much about the place.

I embarked on a ten-day holiday (which got extended to two-weeks!) of fun, food and friendship that sent me into sensory overload.

Below is a list of highlights from my holiday:

When I got off the plane I didn’t realise how much San Diego Airport was going to play a part in my holiday.

This airport is so ‘in’ the city that I could be sitting in traffic and a jet would appear right in front or beside me causing me to jump with fright.

The Coronado Bridge. Oh my God! This bridge is high, rises up and curves all at the same time and there’s only a small concrete barrier between you and a death-spiralling drop over the side and into the sea. I was filled with a combination of terror and excitement all at the same time. It was like being on an amusement ride!

More terror and excitement when I encountered a thin, black snake slithering across the path I was walking down not far from the lighthouse at Cabrillo.

My personal tour guide gave me all sorts of inside information about the animals and the workings of the zoo. I love cats so I was particularly drawn to the snow leopard and the lions. The eagle was pretty awesome too!

A very cool train trip up the picturesque coast to San Juan Capistrano, accompanied by pelicans. Golden sandy beaches, green-blue ocean against the brilliant blue of the sky. And the huge expensive houses that had stunning ocean views. Oh, and ask me about the 3.01 pm ghost train (weird experience!).

A day trip to the quaint old gold mining town of Julian was a highlight. The topography changed as the city was left behind from rolling hills, dry scorched grass to scrub. A stop off at the serene Lake Chuymaca to take photos from the jetty.

Amazing views of San Diego city, harbour and outlying areas. Point Loma Lighthouse was fascinating – I want to live in a lighthouse! 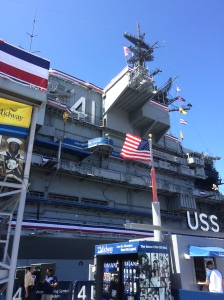 This ship is massive outside, inside, everywhere. I had a fascinating time exploring the ship, taking the bridge tour and, once again, a personal tour with commentary made this tourist experience extra special.

A leisurely morning strolling around and inside the Star of India, HMS Surprise, the B-39 Soviet Sub, USS Dolphin, the steam ferry Berkeley and the swift boat.

I wandered down to the beach and dipped my toe in the Pacific Ocean. Now I can say I’ve done that on the west cost of the US and the east cost of New Zealand.

If you love food, San Diego is the place to go. I think I ate and drank my way everywhere!

Coasterra – would have to be my favourite. Right on the edge of the sea, an upscale Mexican restaurant with incredible food, fantastic service and a stunning all round view of San Diego (oh and the Frida Rita Margarita was to die for). Try the fish and chip tacos, coconut lime shrimp tacos, and finish off with the melt-in-the-mouth butter cake for the best dessert I’ve ever tasted. 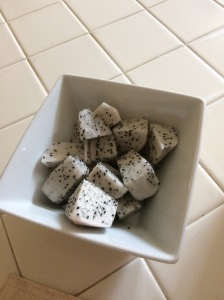 Dragon fruit – the strangest looking fruit I’d ever seen. Pink and round and spiky on the outside but inside, white and dotted with what looks like black seeds. A different taste.

The LED swimmers at San Diego Airport (took me a while to figure out how this worked) and the wall at Los Angeles Airport.

And the brilliant intensely coloured coral at the Birch Aquarium.

Orioles, humming birds (watch they don’t poke you in the head while they dart and flit all over). Lizards, yellow-greenish butterflies, and the cutest, most inquisitive orange dragonfly.

I became fascinated with squirrels when I visited Toronto, but didn’t quite get to see one properly so I was on a mission to see squirrels. Mission accomplished! Really cute and I ended up taking home a stuffed squirrel (toy, not a real one).

I saw my first sea horses at the Monterey Aquarium many years ago and, like the squirrels, have been fascinated ever since.

I spent a morning in a dream like state admiring the tiny little creatures that languished, slowly spinning their way through life.

The sea dragons and pipe fish were also cool. Plus I got to play in the sand.

That would be the skunk at The Galley who decided to take a jaunty walk through the restaurant surprising breakfast diners and staff alike.

San Diego was a pretty city that hugged the harbour and where the sun shone forever (mostly!). The people were incredibly friendly and I talked to everyone everywhere I went. Those who live here are incredibly proud of their city. It had such an appeal and uniqueness to it with its huge navy influence and its proximity of just three miles from the Mexico border.

I loved my San Diego holiday, and I’d definitely go back. Having a personal tour guide made it so much more special and I learnt heaps that I probably wouldn’t have done if I hadn’t been immersed so thoroughly into the culture.

My two top cities in the world have always been Sydney and San Francisco. My holiday in San Francisco will always be a favourite memory, but San Diego just overtakes San Francisco by a hop, skip and a jump.

Next week’s blog: What I was really doing in San Diego and the secret tour guide’s identity is revealed.

What would be your most favourite holiday city in the world?

6 thoughts on “Fun, Food and Friendship on holiday – Part 1”