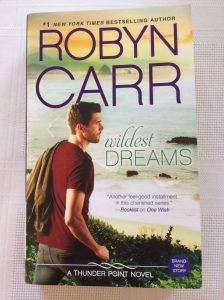 Both Blake and Lin Sun have experienced difficult childhoods. Blake was bounced around a lot while his drug addicted mother attempted to sort herself out. He uses this experience to mentor kids especially those who had similar upbringings. Blake has moved to Thunder Point to use the area for his training.

Lin Su, an Amerasian-Vietnamese, was adopted by a white American family ostracised by her family after falling pregnant with Charlie at 16. She and Charlie live in a fifth wheel. Lin Su is working hard to move into more permanent accommodation and she wants Charlie to have a good education.

Charlie, who is asthmatic and easily prone to allergies, is dying to break free from his controlling and over-protective mother. He strikes up a friendship with Blake who he sees as a substitute father figure. He is determined to make his own decisions and find out who he really is.

Blake and Lin Su are drawn together by Charlie.

This is the last book, No. 9, in the Thunder Point series which follows the lives of various couples and their families in this seaside town.

There is no problem reading this book as a stand alone if you haven’t read the other books. For those readers who’ve followed the series through, it’s nice to catch up with some of the previous characters. However, if this is your introduction to the Thunder Point community there are a couple of sub plots that were unnecessary and added little value to the overall story.

Although this story is classified as a romance, as is all the Thunder Point books, I didn’t feel much of a connection between Blake and Lin Su. This was a slow burn romance which took well over two-thirds of the way to get going.

The author also takes for granted that the reader will know what ALS is, a condition that one of the character’s has, and I had to Google to find out what this was.

This was the last book in the series and certainly not my favourite. I was a little disappointed that some of the original characters were barely mentioned.

Overall this was a nice-don’t-have-to-think-too-much weekend read.